Your Electric Bill After Solar Panels Are Installed

Your Electric Bill After Solar Panels Are Installed

If you haven’t gone solar yet, you may wonder “Do solar panels reduce electricity bills, and if so can solar panels eliminate my electric bill?”.  If and when you do decide to go solar, a negative electric bill can become a monthly reality.

When Boston Solar designs solar systems, we look at your average monthly electric bill and show you what your solar offset will be, as well as an estimate of your average electric bill with solar panels.  Our goal is to cover 100% of your electricity costs, but of course, there are factors to going solar that may prevent this (ie. roof orientation, how many panels will fit on your roof, etc.).

No matter what, even as a solar customer or any other electric utility customer, you’ll always receive an electric bill from your utility company as your still will be grid-tied.  The difference is when you have solar panels installed on your roof or property, many times those panels will produce more electricity than you use, showing a negative balance on your bill. That is the idea of going solar, right -  to offset your entire electric bill, never having to pay for electricity because the solar panels are doing all the work.

For this blog post, we asked a customer from each major Massachusetts electric utility company to share their solar energy bill with us so we could show how much solar panels save on electricity bills here in the Bay State.  Note that every solar energy system is different – not every customer will have a negative bill.

Ira W. of Bedford, MA had his 6.9kW solar PV system turned on 3/22/17. His average annual consumption was 6.45kW, but he opted to go a bit larger as he’s hoping to purchase an electric car in the future. 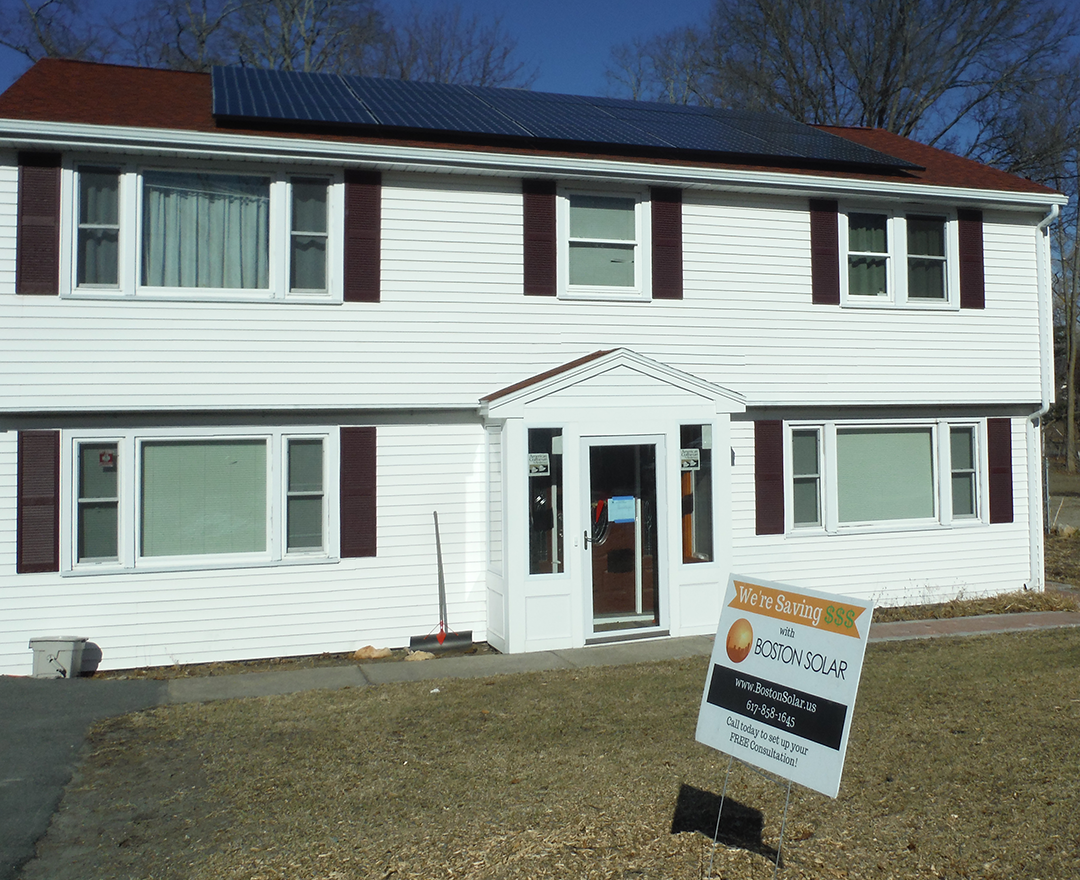 The first page of his bill shows a summary of the past year of electric usage, how much is due, current electricity rates, charges, and usage summary.  The second page of his bill is a bit more detailed with how much he has been credited to date ($118.49) and his overall total charges for the month.  Note that he still must “pay” a delivery fee of $6.43, but this amount is deducted from his net metered balance.

He will generate more electricity in the summer months, but he also has central air conditioning, so he’ll be using more as well. He told me, “It’s so cool that I have a negative bill and don’t have to pay anything to Eversource!” 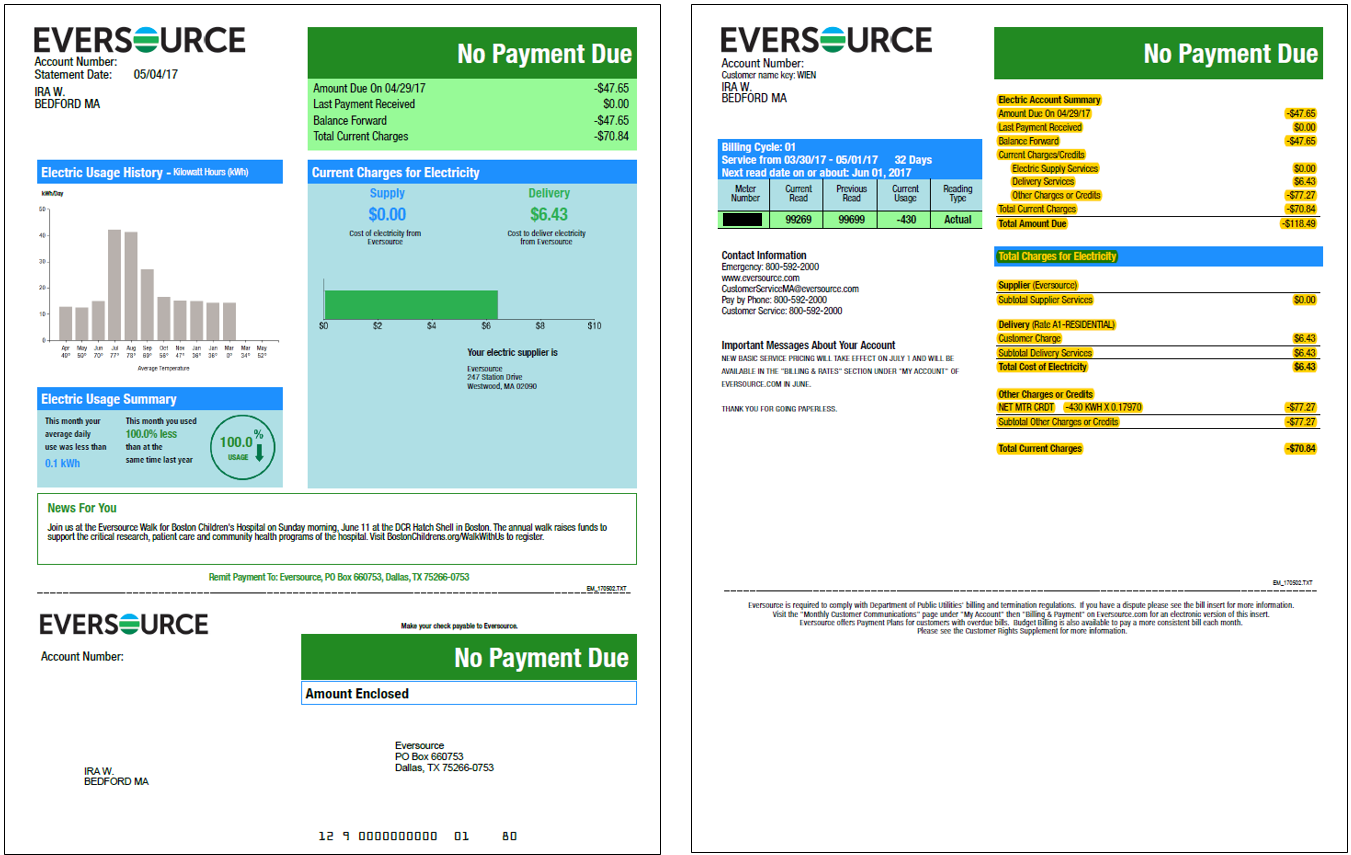 Matt of West Bridgewater, MA on the other hand is a National Grid utility customer. His bill looks a bit different, but the same concepts still apply.  His solar PV system is 11.2kW and his average monthly bill before going solar was $300. His system was turned on 12/14/16. 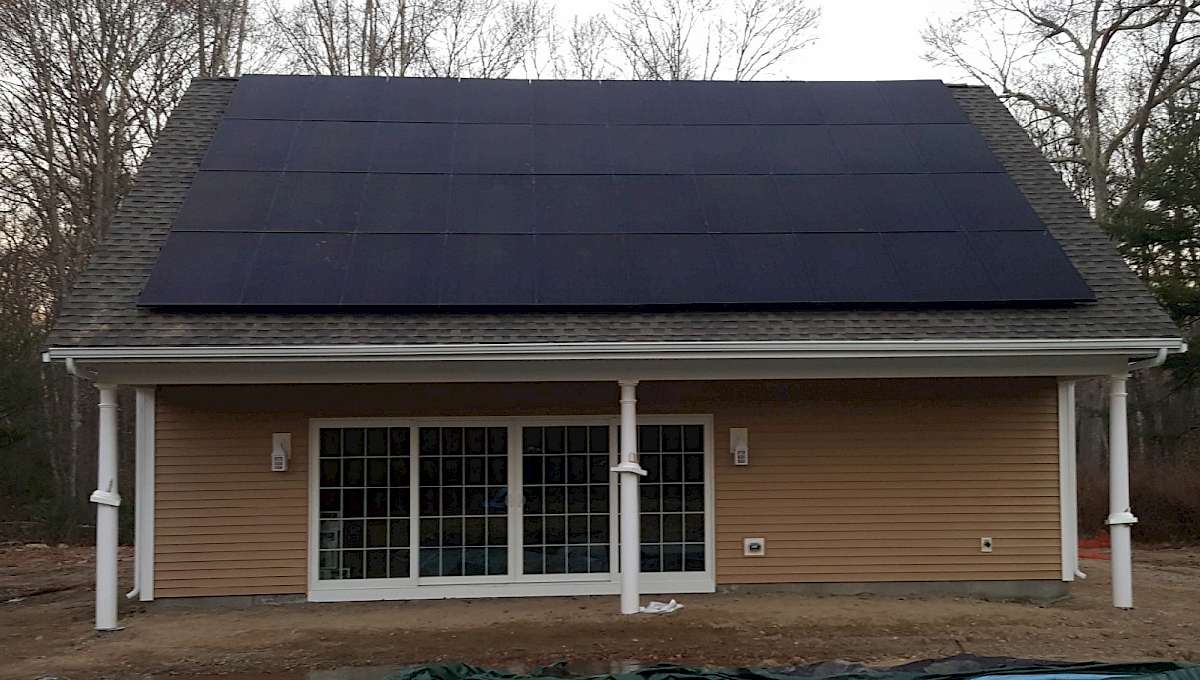 National Grid’s bill doesn’t have as many pretty colors, but it shows you what you need to know. Very important to point out that as a solar customer, your National Grid bill will show **COGEN** next to your name/address.  Make sure this is showing.

Those two numbers should be the same.  If they were the same, calculations would make sense.  Balance forward + total delivery services = credit balance. National Grid is working on a fix to this issue. 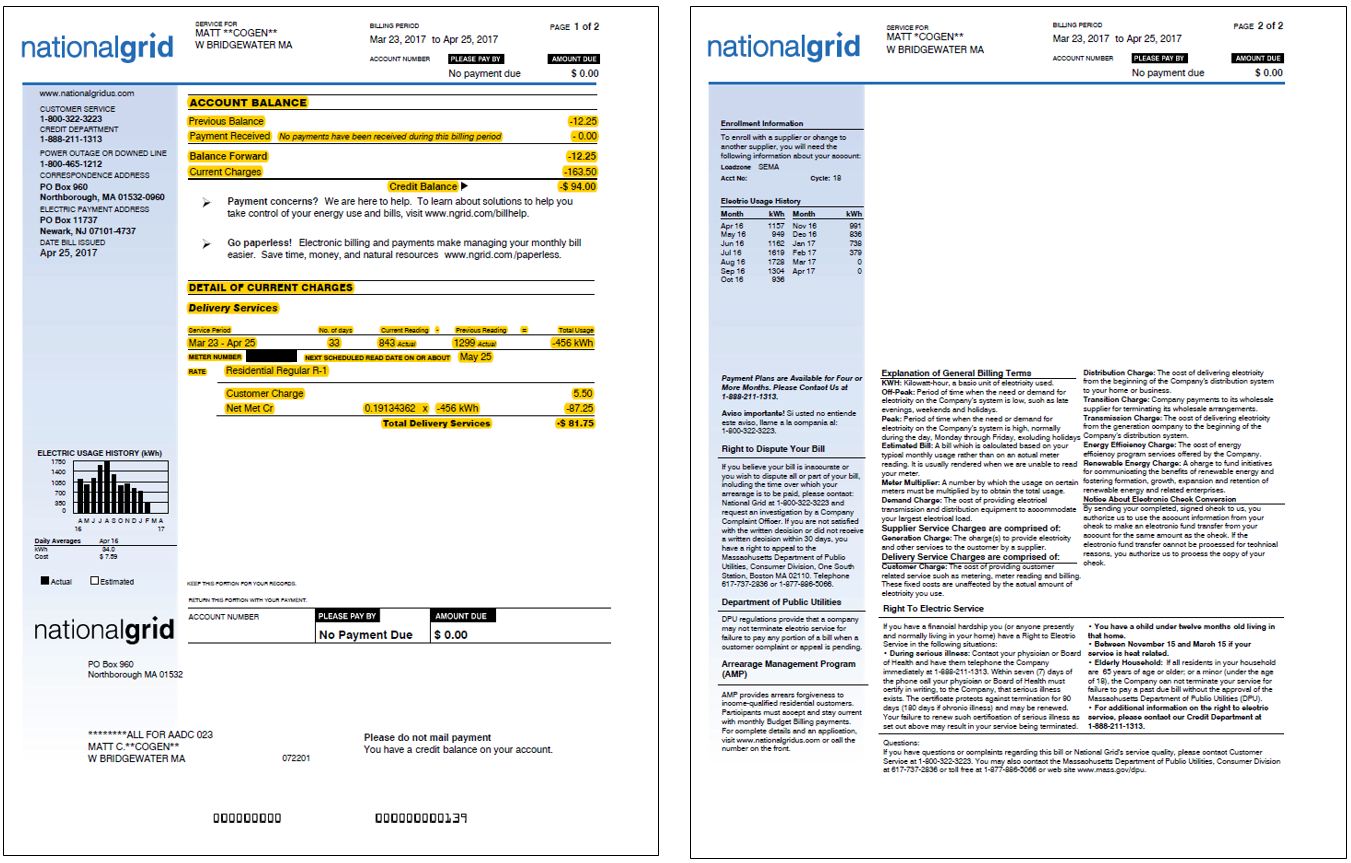 Solar offers incredible financial incentives, a lower or no electric bill with net metering credits, is one of them.  In Massachusetts, we’re lucky to have net metering where the electric utilities allow for our electricity meters to “spin backwards” and give us credits for each kWh produced we do not use but gets sent back to the grid.  These net metering credits can build up to help offset other times when monthly solar production may not cover 100% of a customer’s total electricity consumption.

In both the Eversource and National Grid example above, our customers have negative balances on their electricity bills. In the summer months, their solar energy systems will produce more, but they will also use more with air conditioning, so it’s likely they will end up using their credited amounts, or roll these over to the winter months.

Don’t forget solar panel system purchases can also be reduced with the Federal Tax Credit! This tax credit was recently extended to remain at 26% for 2021 and 2022, so take advantage of that 26% before it drops to 22% in 2023.

Massachusetts homeowners and property owners could also benefit from Massachusetts' SMART incentives, which offers a monthly incentive payment based on the energy your solar PV system produces for 10 years! But this is a declining block system meaning the rate of your incentive payment will decline the longer you wait to go solar.

There’s no better time than now to go solar and start seeing negative electricity bills! Plus with Boston Solar’s Production Guarantee, your system’s energy production is guaranteed or we’ll pay the difference!

See what your electricity bill will look like after going solar with the #1 residential solar installer based in Massachusetts. Call Boston Solar at 617-858-1645 or get in touch here. 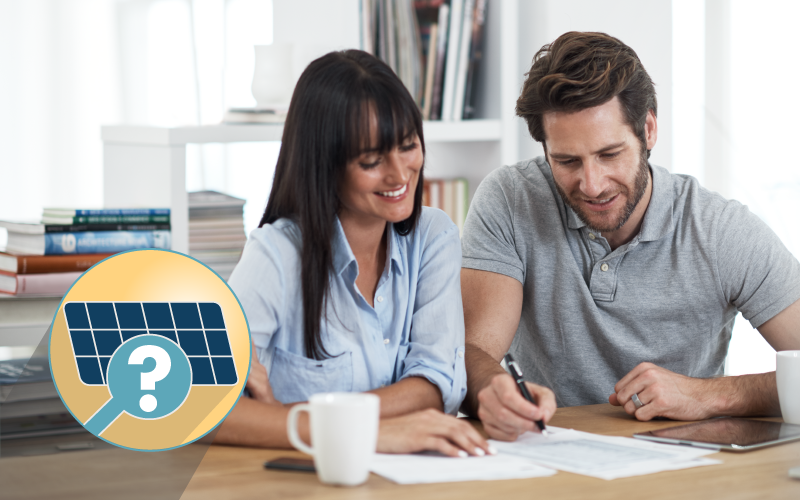