Is the Tesla Solar Roof Worth the Investment?

Is the Tesla Solar Roof Worth the Investment?

When you hear the name Tesla, you usually stop and listen.  Tesla has built a well-known brand with electric vehicles (EVs). Then, they announced the Powerwall, a solar battery, and most recently, the Solar Roof, a mix of solar and non-solar tiles that is meant to replace a typical solar system. Elon Musk is a smart guy – combining the power of solar with EVs.  The ideas he has make sense, but does the investment?  Until last month, we knew the solar/non-solar tiles would be for sale this year, but the cost wasn’t released.  Now that it has been, we’ve been wondering – is the Tesla Solar Roof Worth the Investment?

There are consumers who have told us they don’t like the look of solar panels – they just can’t get over the aesthetics.  Of course, as a self-proclaimed solar geek, I don’t completely understand this (they’re so pretty!!), but I do understand their perspective – solar panels are an addition to the roof on your home.  Solar tiles, on the other hand, may integrate seamlessly into your roof.

However, their price tag may not integrate well with your wallet, and the output won’t offset your electricity bill like standard solar panels do.

Tesla has an online calculator so you can see what it would cost you to have a Solar Roof installed and how much your electricity offset can be per month.  I typed in the address of my home (where I had solar installed last year), and this is what it showed me: 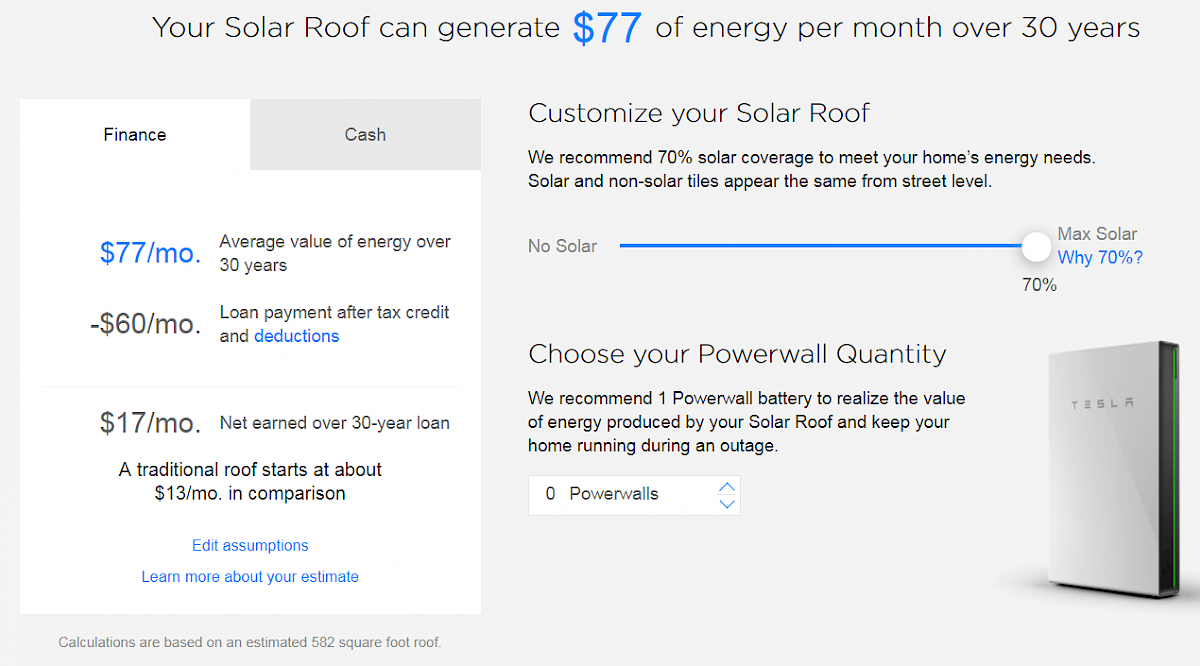 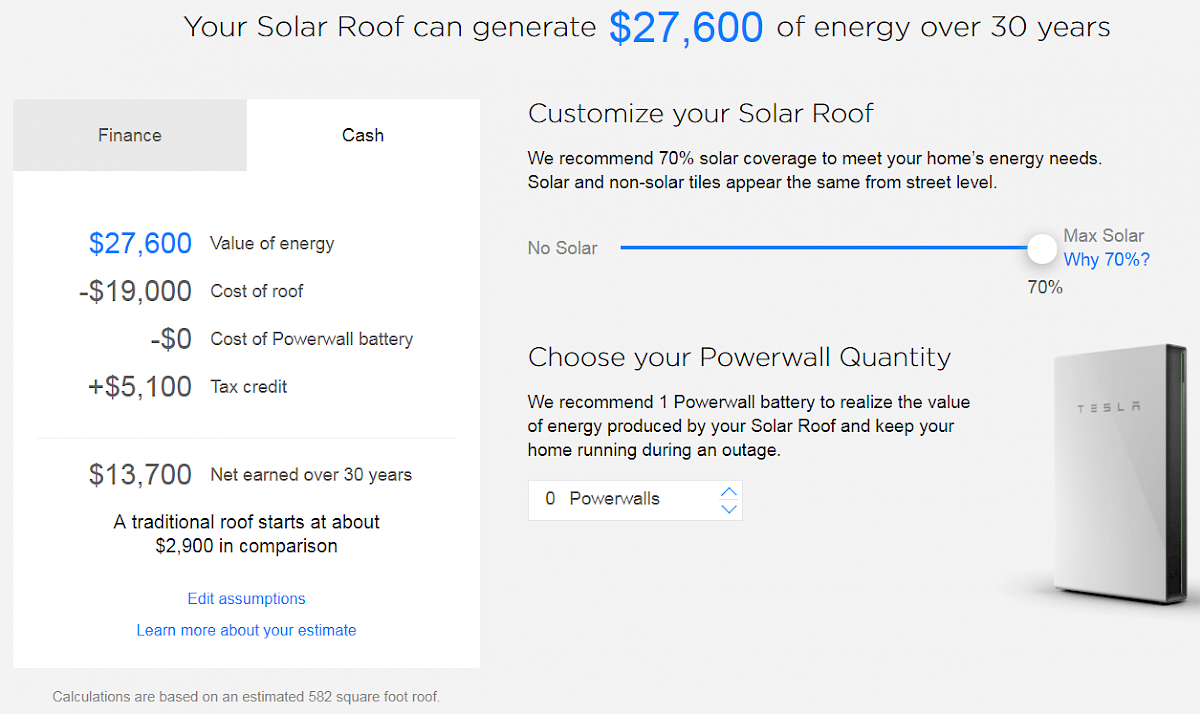 If I paid upfront in cash for a Solar Roof (70% solar tiles and 30% non-solar tiles), it would cost $27,720 and offset my electric bill by $77/month.  I’d need more than double that size Solar Roof to cover my yearly average electricity usage of $200/month, but the above calculations max out my roof space. The solar system I had installed is 6.5 kilowatts (kW) and cost approximately $25,000 and covers 100% of my electricity needs.  I’d need more than double the number of solar tiles to offset 100% of my electricity.  If I did have a roof to support that, it would cost me upwards of $71,000 (I figured this out by playing with numbers in their online calculator).  That’s almost 3x what I paid for a standard solar panel system.

Granted, in many blog and other articles, I’ve read the Solar Roof, in most cases, will be double that of a standard solar installation plus a new roof (because the solar/non-solar titles will replace your roof - my calculations above didn't take a new roof into consideration). It's also hard to compare "apples to apples" because Tesla doesn't tell you the wattage of the cells, so you have no way of telling what size Solar Roof system you're seeing a "quote" for.

Is it worth it?

I guess that depends on who you talk to.  If you’re someone who wants to go solar, has an extra $25,000-50,000 to spend and doesn’t like the traditional look of solar panels, then sure.  However, to most, I don’t think aesthetics are worth 2 or 3 times what you’d pay for a standard solar panel system and installation.  Not only that, the payback period is 2 to 4x longer for the Tesla Solar Roof.

The Solar Roof idea is a great one, and consumers tend to listen to Tesla, but make sure you read the non-existent fine print.  They don’t tell you how much energy each solar tile will generate (ie. number of watts per solar tile), how the tiles will be installed, how much wiring is involved (and where those wires will be) or what the degradation characteristics are. These are extremely important to any type of solar system. Solar panels have specification sheets that explain these characteristics (and more, for the solar geek in you), but there are no spec sheets to be found on the Tesla Solar Roof solar tiles.

Tesla’s online calculator leads you to put a deposit down on a system – but as a consumer, you’d want to get all the facts, right?  This is one of the reasons at Boston Solar we have customers meet with a Solar Consultant to review all their options and really understand what they are investing in.  Whether it’s a $30,000 standard solar system or a $70,000 Solar Roof from Tesla, make sure you’re extremely well informed as to what you’re investing in and what the payback really is.

Boston Solar doesn't offer Tesla's Solar Tiles, but also note that these are in Alpha testing mode in California in 2017 ONLY.  Tesla has yet to release dates for consumer use/purchase outside of California. 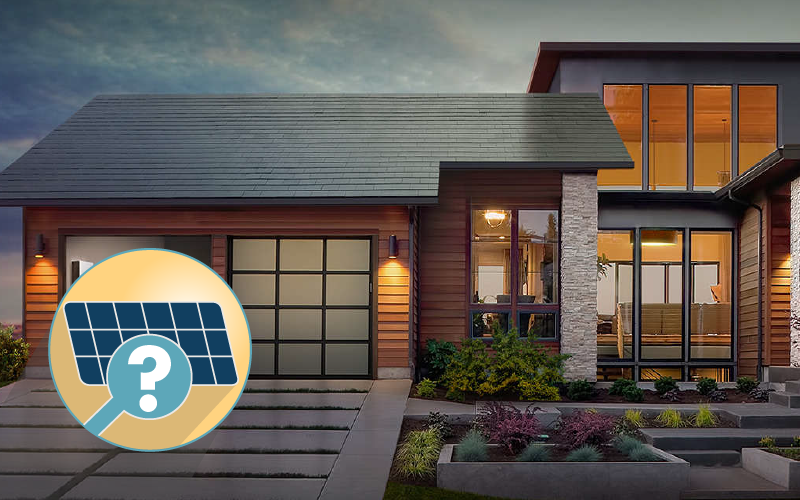